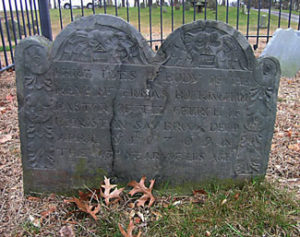 The Saybrook Platform was said to be the most important ecclesiastical action taken in colonial Connecticut. Most of the local churches were independent for all intents and purposes. What the Saybrook Platform succeeded in doing was to establish a “mild advisory control of the whole over the parts.” During 1708, twelve ministers and four laymen representing approximately forty churches in colonial Connecticut met in Nathaniel Lynde’s house on Saybrook Point and developed the Platform. Thomas Buckingham of Saybrook, a founder of the Saybrook Collegiate School, was amongst the participants and, with Reverend James Noyes, was chosen as a moderator. Thomas Buckingham’s gravestone is shown at left surrounded by a wrought iron fence which is adorned with a commemorative plaque added in 1907, seen at right. 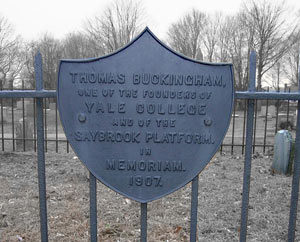 The Platform consisted of two parts: “A Confession of Faith”, and “Heads of Agreement, and Articles for the administration of Church Discipline.” It stood as the ecclesiastical legal standard until 1784 and remained in general effect until after 1850.

Thomas Short of New London, in 1710, issued “The Saybrook Platform of Church Discipline,” which was the first book printed in the colony of Connecticut. The Platform was recommended by the elders and messengers of the churches and was adopted by the legislature as the “religious constitution of the colony.” The “Confession of Faith” was adopted by the Saybrook Collegiate School as well.

Having adopted the Platform, a proviso was adopted as well that basically said that if some churches “soberly differ or dissent from the united churches”, they were permitted to exercise worship and discipline “in their own way, according to their consciences”. This proviso was included because it was known that not all churches were supportive of the Platform and some were extremely opposed to it.