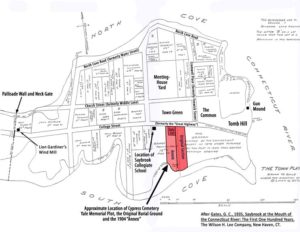 This map of the Town Plat on Saybrook Point was prepared by Gilman Gates in 1935 from original town records. The properties shown were owned by residents who came after the original “men of quality” for which the colony was established. Actually, the only original patentee that came to Saybrook was George Fenwick. He and Lady Fenwick and their family lived in the structure that became, approximately 65 years after it was built, the Saybrook Collegiate School and, upon removal to New Haven, Yale University. The Annex section of Cypress was originally part of the land that Fenwick owned and was likely an orchard. Other than Fenwick, all of the other “men of quality” remained behind in England when religious persecution eased, allowing them not to have to flee to the new colony. Within twenty years or so, many of the property owners who’s names appear on the Town Plat map left Saybrook with Reverend Fitch who went to Norwich to establish a new congregation.