Like all cemeteries, Cypress has its share of veterans of the many conflicts that have occurred throughout the history of the United States and before. The age of Cypress makes it unique in terms of the number of wars represented by the buried veterans. The wars fought by Cypress veterans and the number of interred veterans in each conflict include the French and Indian War (4), the Revolutionary War (9), the War of 1812 (12), the Civil War (8), the Spanish American War (4), World War I (28), World War II (37), the Korean War (6), Vietnam (6) and the Persian Gulf War (1). Although this is as complete as list as cemetery documents show, there may be others as well. 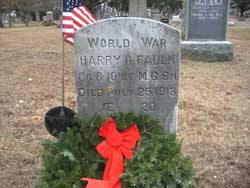 One veteran in particular was noted enough so as to be commemorated with a park and a National Honor Roll Memorial Tree, the large oak located in the northern part of the Annex. His name was Harry Gilbert Faulk and of the 28 veterans in Cypress who fought in World War I, he was the only Saybrook resident actually killed in action – in France on July 25, 1918 at 20 years of age (photo below right). Company C of the 101st Machine Gun Battalion, to which Harry was attached, was heavily shelled while sleeping on the edge of some woods north of Chateau Thierry on the morning of the 25th which resulted in significant casualties. Harry, who was mortally wounded, was one of the casualties.

The following was written about Harry in book about the 101st entitled History of the 101st Machine Gun Battalion: 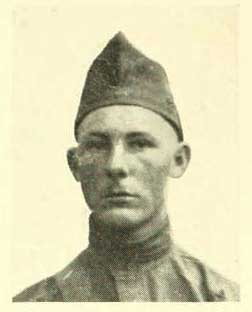 Harry was the youngest of six children of Frederick Olaf and Hilma Justina Faulk, who were both born in Sweden. The Faulks were well known in Old Saybrook and on Saybrook Point in part because they owned a small store at the corner of Bridge Street and College Street that also included a post office (photo at left). The location is now occupied by one of the condominium buildings of the Saybrook Point Hotel complex. One can imagine that young Harry spent a lot of time at the family store.

In census records for 1910, while Harry was still in high school, his father Frederick was identified as being a foreman at the Connecticut Valley Railroad locomotive roundhouse located across College Street from the store (the site is preserved on the National Historic Register). 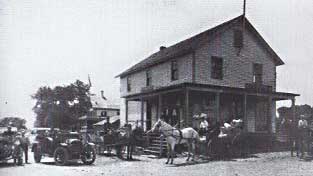 Frederick and Hilma, buried in the Faulk plot side-by-side with Harry, outlived him by only 5 years and 15 years, respectively, as they were older parents when Harry was born. Frederick died at age 65 years in 1923, only two years after bringing Harry home from France to Cypress Cemetery; Hilma died ten years later in 1933 at age 72 years. Also in the Faulk plot are three of Harry’s five older siblings: Frederick Oscar (d.1956), Walter (d. 1970) and Hilma Louise (d. 1989). 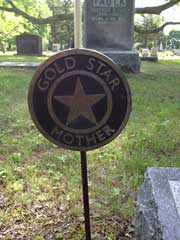 Finally, Hilma is honored as being a member of American Gold Star Mothers, a membership organization honoring mothers who have lost a son or daughter in the service of their country. Although many local and state organizations existed throughout the time of World War I, the national organization that exists today didn’t begin until 1928.

During the war, it was custom for families of servicemen to hang a banner called a service flag in windows of their homes. Blue stars were hung for each child involved in the war effort. If a son or daughter was lost in service, the blue star was replaced with a gold star. The gravesite marker is symbolic of the service flag with a gold star. Gold Star Mother’s Day is celebrated every year in the U.S. on the last Sunday in September.