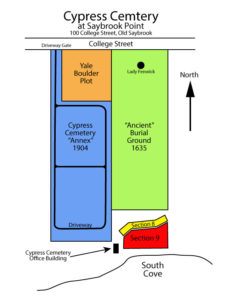 Since 1635, Cypress Cemetery only included the “ancient” or “old” burial ground on the eastern side of the property as shown on this map.  In 1904, the “Annex” was added to the west. The Yale Boulder Plot was included at that time.  The Annex portion of the cemetery is thought to be a part of the 13 acres originally owned by Colonel George Fenwick and the, by Nathaniel Lynde.  The Annex, according to maps, was likely the Fenwick’s orchard spoken of in old records.  The 1885 map of Saybrook Point shows that the property appeared to include an orchard.

In 2010, the Association decided to expand the long-quiet cemetery, adding over 400 plots and eventually up to 72 cremation niches in Sections 8 and 9 in the southeastern portion of the property by South Cove.  That area had long been a topographically “low” area that, on older maps, appeared to be a turnaround.  Our building was constructed at the same time and now hosts our files and is the location where the Association meets.

If you have any questions or comments, use the form on our “Contact Us” page, or write us at cypresscemeteryosct@gmail.com